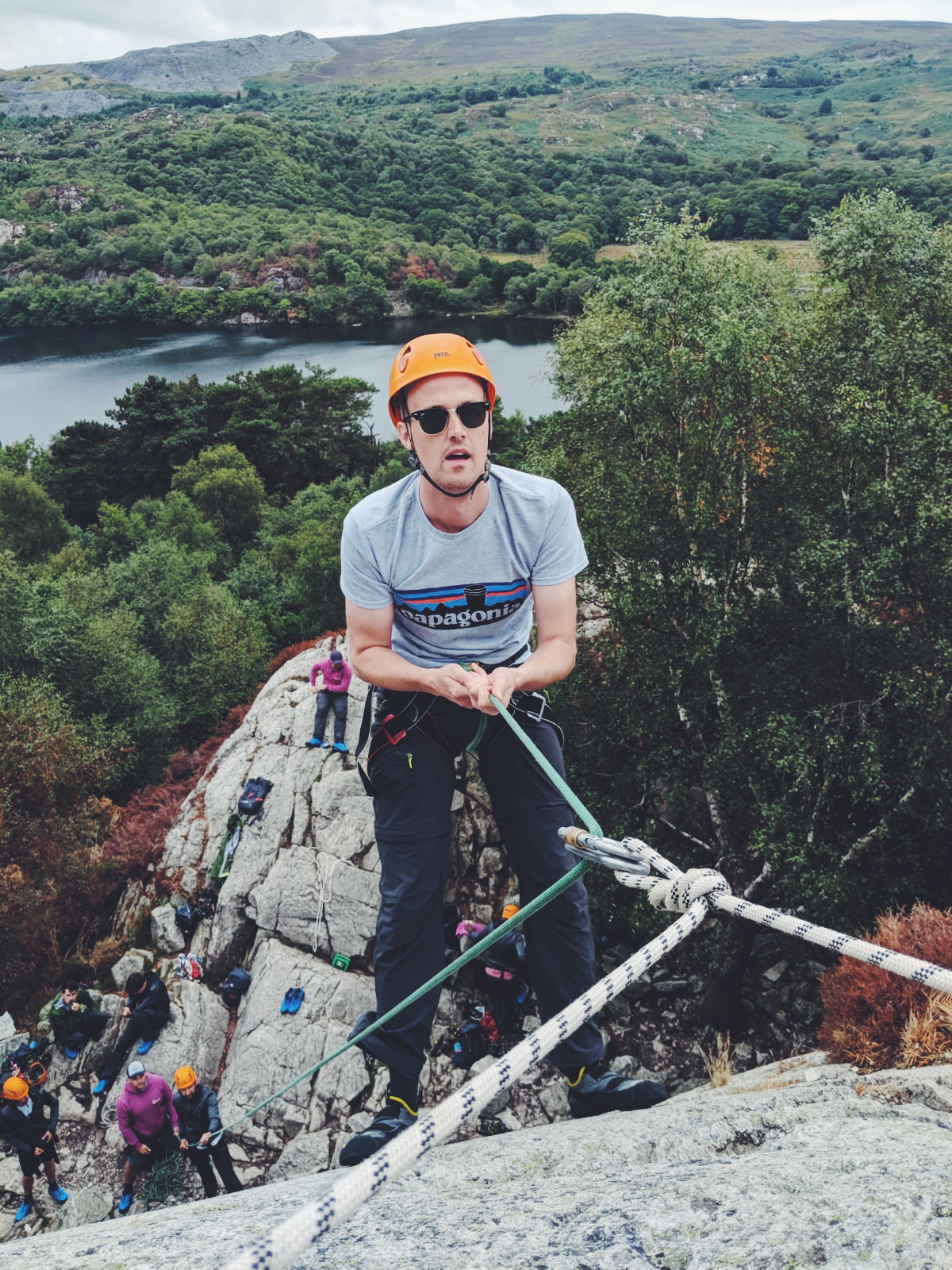 Since I started my Instagram page just over a year ago I’ve been to a few ‘dad meet ups’ so when Skinner aka @nomadidaddy invited me along to ‘Dadventure Festival’ with 15 other dads I wasn’t as apprehensive/nervous about it as you might think. Firstly, I had already met Skinner and a few of the other guys so I knew at least 31.25% of the guys there wouldn’t be dicks (yes, I have included myself in that percentage). Secondly, I’m yet to meet anyone at any of the events I’ve attended that I genuinely didn’t like (on the whole, instadads are a pretty friendly bunch). Finally, I thought “how much of a ‘dadventure’ can this actually be?” I was pretty sure it would just be 16 dads sitting round a campfire in Wales drinking Adnams ale and M&S barbecue. I was very wrong on 1 of these 3 assumptions…

At 11am there was a knock at the door from a Jeep delivery driver who handed me the keys to a shiny new top of the range Jeep Compass. I loaded up the Jeep with the essentials that Skinner asked me to bring (pants, a mountaineering towel and some bravery… 2 out of 3 aint bad eh?) and set off for Epsom to pick up Connor (@dads_and_donts). I’ve formed a great friendship with Connor over the last year and we’ve met up a few times for different dad themed events so it was really cool to see where he lived and meet Lily and the kids. After a quick stop off at Connor’s house we were en route to Reading to pick up Daniel (@iamdanielyoung) and David (@davidsamgibbs). I hadn’t met Daniel or David before but I had been watching their friendship blossom on Instagram over the past few days. As we pulled up at David’s parents house they skipped down the drive holding hands, jumped in the car and proceeded to tell us all about pushing their beds together in a hotel the night before… 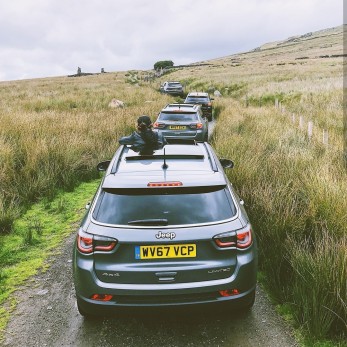 The 4.5 hour drive seemed to go pretty quickly while we swapped stories of our social media journeys so far. Wales was offering up some serious scenery and self confessed city boy Connor was getting very excited about seeing tractors in real life. We arrived at Llanberis Youth Hostel for Pizza and beer where we did a quick intro of who we were etc and I realised what a diverse group of guys I’d be spending the next few days with. We jumped back in the Jeeps and headed off into the hills in Convoy (I’ve been dying to use that word). We had to do some proper off roading to get to the Lodge and we all realised how off grid we would be for the next few days.

We Arrived at Crashpad Lodges at about 9pm and spent 30 minutes checking out the awesome kit that we’d be using overthe next few days. Shortly after, a few of us congregated in the kitchen (as all good parties do) and rather than the conversation revolving around football or the usual bloke topics, we found ourselves discussing the pressures we have faced as fathers and how we have struggled or succeeded in supporting our partners with the struggles they have faced as new mothers. At this point I got a real sense that this wouldn’t just be a bit of a jolly and there was a chance that some genuine bonds could be formed.

We started day 2 with a Yoga class from Charlie Dark aka @daddydarkRDC. I’d never done a yoga class and didn’t know much about it so I decided to throw myself into it and savasana like my life depended on it (savasana, also known as ‘corpse pose’ is basically just laying flat on your back, I’m world class at this one). Charlie was really engaging and spoke a lot about ‘being present in the now’ which is something I will definitely be taking away from this experience. For the next hour we wobbled together, laughed together and fell over together (okay I was the only one who fell over) and from this point on I knew we were all going to get along just fine. 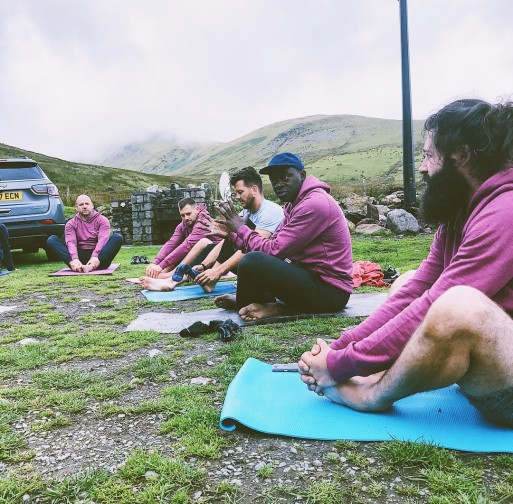 After our Yoga session we set off to do some rock climbing by Llanberis Lake. When we arrived at the rock face it all suddenly got very real. I wouldn’t say I’ve ever been overly fond of heights, but equally never particularly afraid. I think I’m one of those people who gets that urge to jump when they’re near a ledge but would never actually do it. It’s hard to explain, but yeah… that. Anyway, Skinner and Russ (@Rooselbelchere) scampered up to the top and set up the ropes and supports while we all stood around looking at each other weighing up who was going to go first. Ever the gentleman I shuffled my way to the back to let everyone else have a go first. Dan stepped up and made it look ridiculously easy, even managing to do a bit of vlogging at the top, which considering he has one arm takes some doing, the respect I have for this guy went through the roof at this point. Everyone had a go and we all made it up to the top. There were no competitive attitudes or one-upmanship which is often the case when get a largegroup of men together, just good vibes all round. After a quick scramble up to the top of the ridge to take in the view we made our way back to the lodge. 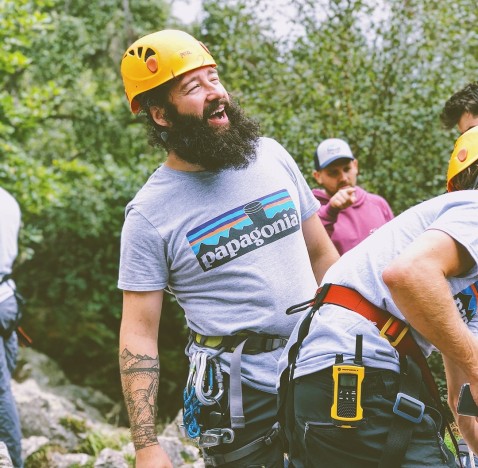 After a quick change of clothes we grabbed our firelighting kit (kindly donated by @light_my_fire_sweden) and went out to the yard to watch Skinner and Russ give us a demo on how to light fires using various items you might have with you in anemergency. We learned how to light fires using batteries, cough syrup, bark, tin foil, wire wool and all manner of other stuff. Sergei (@thedadlab) was paying close attention here so we may well see him burning his shed down with the battery from a fire alarm on insta live soon. Anyway, I had been watching ‘Naked and Afraid’ on Discovery in preparation for this very activityso I was sure I was going to nail it first time. I sat on my own, with my @whitby_and_co knife started making tinder. After about 15 minutes I was only one who hadn’t lit a fire yet. Connor and Mike both ‘kindly’ came over… “Do you want a tampon mate?” Not quite what I was expecting to hear on an adventure trip but there you go. I had changed my tune after another 30 minutes and found myself shouting “Quick! Somebody get me a f*cking tampon!” The next time Kate sends me out to the shop for tampons I’ll look at them with a new found respect and might even pick up an extra pack incase I need to light a fire on the way home. Another thing that will stay with me forever is Sergei smashing logs to bits with a tiny axe and everyone looking on in awe/fear/silence for 2 hours. 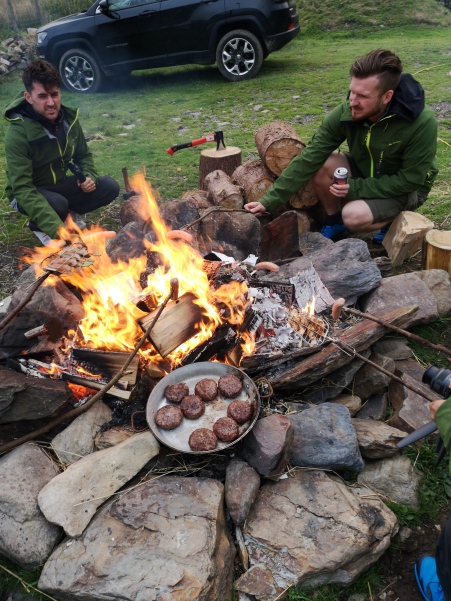 Once the fires were lit we cooked up some amazing M&S food and even introduced Rogier (@the.suburbandad) to halloumi for the first time. “I like the sound it makes on your teeth!” His dutch mind = blown. A few questionably pink sausages later we were prepping for some night navigation. Skinner and Russ had hidden 2 bottles of Adnams single malt whisky in a field, we were given a nightlight a compass and a bearing before heading of into the night. We needn’t have bothered with the gear to be honest as Matt (@rad_young_things) usedsome sort of sixth dad sense and sniffed it out in about 2 minutes. We spent the rest of the night sat around the camp fire drinking beer and swapping stories of fatherhood, social media and not getting as much sleep as we should before climbing a mountain at 7am.

After a quick breakfast and bag prep we set off for Snowdon in the rain. We looked like a private army/crew of bin men in our matching waterproofs from Decathlon and awesome blue hiking shoes from Salomon. We had a broad range of hiking skill in the group from complete novice (me) to seasoned pro’s like Huw (@wander_wonder_huw) Skinner and Russ (@rooselbelchere). I realised pretty early on that this wasn’t going to be easy. The rain started off pretty light and we stopped at regular intervals to give everyone (me) a rest. As we got higher the visibility got worse, the weather got worse, the footing got worse and the conversation started to dry up as we struggled on in horizontal rain and I’m pretty sure Skinner lied to me every time I asked him how far it was (about 435 times). As we approached the summit the wind really picked up and it genuinely got a bit scary. Apparently there can be a 45 minute wait at the summit to for photo’s etc but we only saw a group of teenagers up there in shorts and t-shirts trying look cool in their Nike Flyknits and blue lips. We managed to get up the stone steps to the top where for a few minutes we forgot about our sore feet and wrinkled hands and shared a genuine moment. The wind was so strong that were literally clinging on to the rock and we had to crawl down the stone steps. We took a brief few minutes refuge in some storm shelters that we brought with us to try and regain some heat and refuel for the walk down. At this point Skinner announced that we had to get down “as fast as possible!” These are not the words you want to hear coming from an arctic guide when you’re halfway up a mountain. We packed up, put some extra layers on made our way back to the lodge with a huge sense of achievement knowing that we had all just shared an experience that we would remember for the rest of our lives. 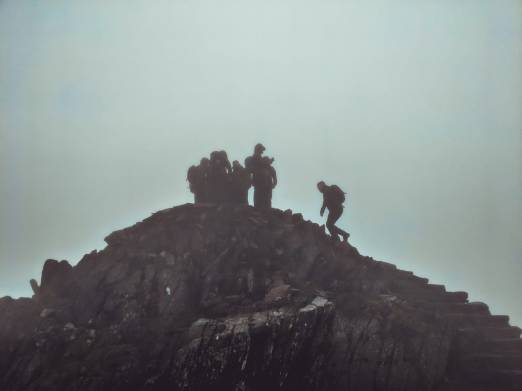 After a day of physical exertion we were more than happy to have a quiet night in. Connor and I got in the kitchen, put some Paul Weller on and cooked up an epic M&S chicken keralan curry for the guys while sinking a few Adnams ales. The food went down well and we all spent the night talking about how brave we had all been. Chill level was reaching maximum by this point so after some great chat and a hot chocolate we got an early night.

We were up at 6am to hit the road and get Daniel to the airport for a flight. After we pulled out of the lodge we could see that the small stream we had driven though to get there was now basically Niagra Falls. The lads jumped out ‘so there was less weight in the car’… more like they didn’t to risk getting wet if the Jeep didn’t make it. They needn’t have bothered, the Jeep Compass ploughed through like Sergei through a pile of logs and we hit the road. Connor had swapped Jeeps so we had Mr Charlie Dark to keep us entertained with talk of how nice Beyonce smells and thoughts of starting ‘Hike Dem Crew’. We made good time and dropped Charlie and Daniel at Heathrow where David and Daniel made an emotional farewell. The remainder of the journey was awkward to say the least with David telling me how special Daniel is all the way to Reading.

Huge thanks Skinner, Russ and all the brands who helped to make this event possible, I’ve taken far more away from it than I ever expected to. 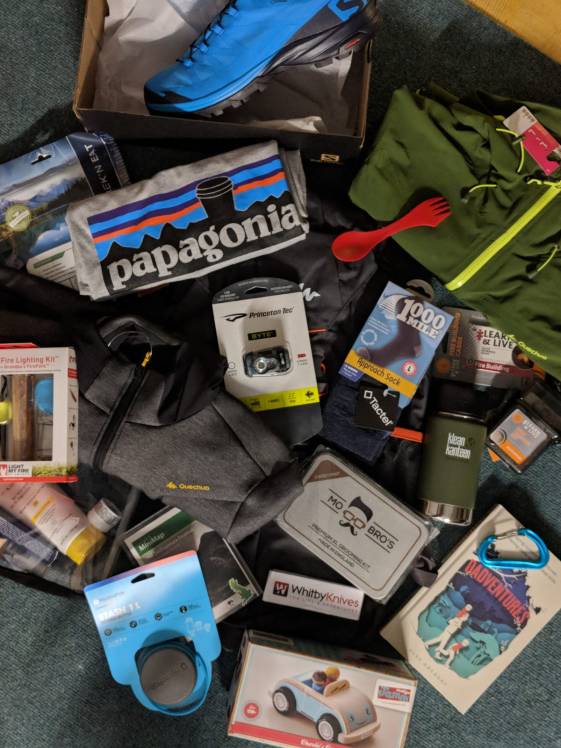 Light My Fire of Sweden – http://www.lightmyfire.com